On this episode, Taylor talks with the director of CREEES, Dr. Mary Neuburger, about her latest book entitled Ingredients of Change: The History and Culture of Food in Modern Bulgaria. Thanks for listening! 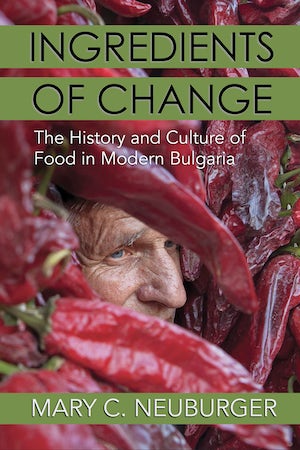 From the publisher: Ingredients of Change explores modern Bulgaria's foodways from the Ottoman era to the present, outlining how Bulgarians domesticated and adapted diverse local, regional, and global foods and techniques, and how the nation's culinary topography has been continually reshaped by the imperial legacies of the Ottomans, Habsburgs, Russians, and Soviets, as well as by the ingenuity of its own people. Changes in Bulgarian cooking and cuisine, Mary C. Neuburger shows, were driven less by nationalism than by the circulation of powerful food narratives—scientific, religious, and ethical—along with peoples, goods, technologies, and politics.
You can find Ingredients of Change on Amazon: https://www.amazon.com/Ingredients-Change-History-Culture-Bulgaria/dp/1501762494#:~:text=%22Ingredients%20of%20Change%20provides%20exciting,was%20lost%20with%20its%20collapse.%22

ABOUT THE GUEST
Dr. Mary Neuburger is currently the Director of the Center for Russian, East European and Eurasian Studies, the Chair of Slavic and Eurasian Studies, Professor of History, and Associate Director of the Global (Dis)Information Lab, at The University of Texas at Austin. Her research focus is on modern Eastern Europe with a specialization in Southeastern Europe. Her research interests include urban culture, consumption, commodity exchange, gender and nationalism. She is the author of Balkan Smoke: Tobacco and the Making of Modern Bulgaria (Cornell University Press, 2016) and The Orient Within: Muslim Minorities and the Negotiation of Nationhood in Modern Bulgaria (Cornell University Press, 2011). She teaches courses on the history of modern Eastern Europe.

PRODUCER'S NOTE: This episode was recorded on October 5th, 2022 via Zoom.