In this episode, Matt speaks with Dr. Oksana Lutshyshyna, acclaimed fiction author and beloved professor at UT Austin, about her most recent book Ivan and Feba (Іван і Феба), as well as about her earlier work Love Life (Любовне життя), humor in her writing, her inspirations, and the state of American and Ukrainian politics and literature. A few weeks ago, Dr. Lutshyshyna won Ukraine's highest state prize for the arts, the Shevchenko National Prize for Literature, for her latest book Ivan and Feba. See more about the prize and her award here: http://shevchenko.org/news-events/news/winner-shevchenko-prize/ 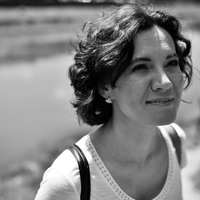 Dr. Oksana Lutsyshyna was born in Uzhhorod, Ukraine SSR in 1974. She is a writer and translator, and lecturer in Ukrainian studies at the University of Texas in Austin, where she teaches Ukrainian language and Eastern European literatures. She holds a PhD in comparative literature from the University of Georgia. Dr. Lutsyshyna translates alone or in collaboration with Olena Jennings, Kevin Vaughn, and Daniel Belgrad. Her translations of poems and essays by Vasyl Makhno, Marianna Kiyanovska, Bohdana Matiyash and other Ukrainian authors have appeared in Postroad Magazine, The Wolf, Ukrainian Literature: A Journal of Translation, St. Petersburg Review, and other venues. Her original work includes two novels, a collection of short stories, and three collections of poetry, all published in Ukraine. Her most recent novel received the Shevchenko Prize in literature in March 2021, which is traditionally awarded by the president of Ukraine.