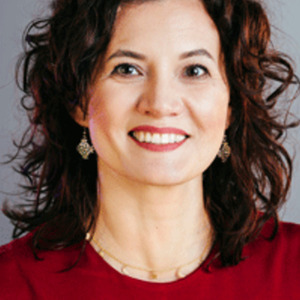 Oksana Lutsyshyna was born on October 10 1974 in the town of Uzhhorod. She is a Ukrainian writer, poet, literary scholar, and translator. She graduated with her BA in English from Uzhhorod National University. Dr. Lutsyshyna started writing in the early 1990s; she was an active participant of Irpin literary seminars. She worked at Uzhhorod National University teaching English. In the early 2000s she left fro the United States, to do her master’s degrees in comparative literature and gender studies. She also di a PhD focusing on the works of Bruno Schulz and Walter Benjamin. Currently she is teaching the Ukrainian language and Eastern European literatures at The University of Texas in Austin.

Oksana Lutsyshyna is the author of four poetry collections, one collection of short stories, and two novels. She is the recipient of several literary prizes, including the UNESCO prize and the Shevchenko National Prize for Literature. In collaboration with Olena Jennings, Oksana is translating the works of the Ukrainian authors into English. Among the ones whose works she translated are Marianna Kiyanovska, Vasyl Makhno, Kateryna Kalytko, Bohdana Matiyash, and Artem Cheh.

Poems and short stories of Oksana Lutsyshyna are featured in numerous anthologies and journals. She is also writing critical articles and blogging fro the feminist site “Povaha.” She has academic publications in both Ukrainian and English.