Bulgaria, Belarus, books—oh my! In this exciting episode hosted by Matt and newbie host Katherine, Assistant Professor Kiril Avramov the University of Texas at Austin sits down to discuss his new book, “Russia’s Hidden Armies,” the recent detainment of Russian mercenaries in Belarus, and the anti-corruption protests currently raging within Bulgaria. Tune in for an episode filled to the brim with shocking details over Post-Communist Bulgaria and secret armies!

For more on the Wagner mercenaries, read the piece by SlavX blogger Lexi Jovanovic: https://www.slavxradio.com/articles/wagner 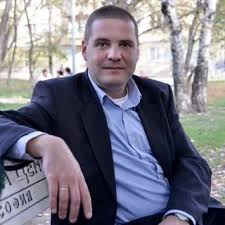 Dr. Kiril Avramov is a post-doctoral research fellow of the Intelligence Studies Project (ISP) at the University of Texas at Austin. Dr. Avramov was, until December 2017, the Acting Vice-Rector for International Relations and Research at the New Bulgarian University (NBU) in Sofia, Bulgaria and an Assistant Professor of Political Science at NBU. He studied previously at Gustavus Adolphus College (USA/MN), the University of Aberdeen (Scotland), University of Sofia (Bulgaria), Central European University (Hungary), and NBU. He taught in the Department of Political Science at the University of Sofia until 2005 and, from 2006-2010, was also the Director of the international consultancy and research institute “Political Capital” in Bulgaria. In 2010, he was appointed as the Director for International Relations of Political Capital at the firm’s headquarters in Budapest.

Dr. Avramov’s main research interests are information warfare, psychological operations and mass cognitive hacking, as well as the “weaponization of information” and their respective application and effects on individual and group decision-making processes in the Central and Eastern Europe and MENA regions. Additional areas of interest include political elites’ and non-elites’ decision-making resilience mechanisms and radicalization in post-transition democracies during identified active “psyops” and third party information operations. He is a member of the Bulgarian Political Science Association and the ECPR’s standing groups on Extremism & Democracy, Central and East European Politics, Elites and Political Leadership, Politics and the Arts, and Southeast Europe. He is also a member of the RAN-DERAD network under the Migration and Home Affairs Directorate of the European Commission.
Connect with Dr. Avramov on Twitter: @avramovok
Visit him on the Strauss Center website: https://www.strausscenter.org/person/kiril-avramov/ and at the Intelligence Studies Project page: https://intelligencestudies.utexas.edu/about/leadership

NOTE: This episode was recorded on Monday, August 24th, 2020 via Zoom.